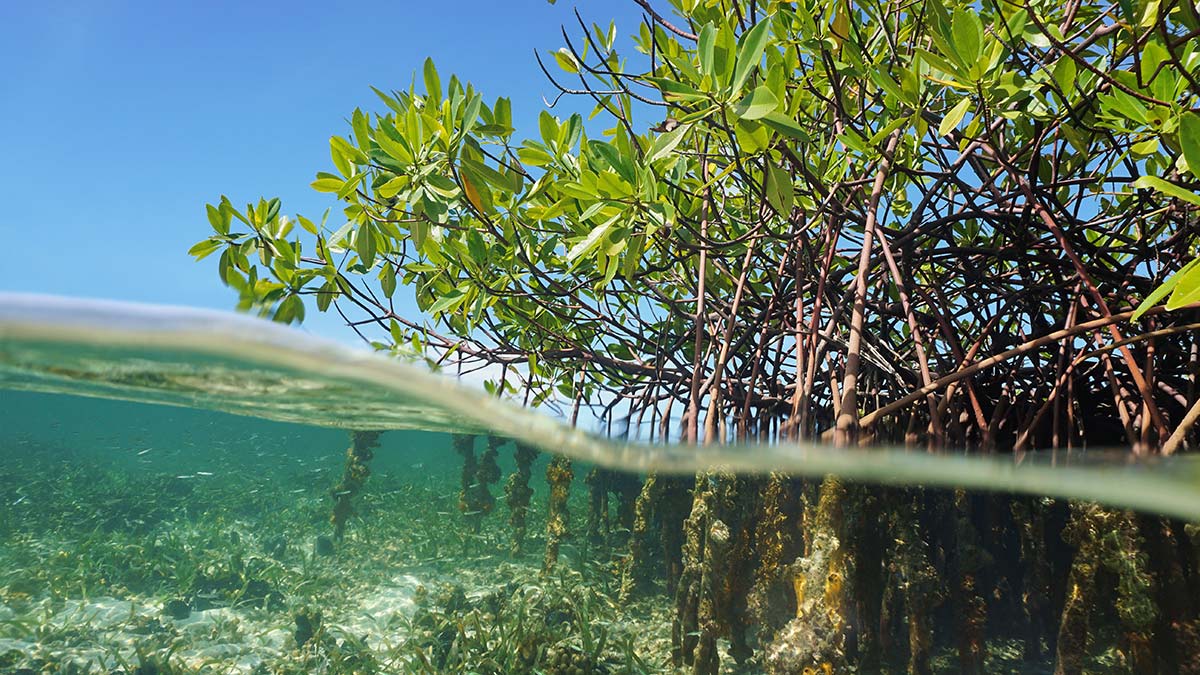 What Is Blue Carbon and Why Does It Matter?

Though terrestrial forests typically get most of the attention, they are not the only ecosystems that possess a natural ability to fight climate change. There are three coastal ecosystems that are also highly effective at sequestering carbon dioxide: mangroves, seagrass, and salt marshes. The carbon that is captured and stored by these coastal ecosystems is known as “blue carbon.” Pound for pound, these blue carbon ecosystems can actually store up to 10 times more carbon than tropical rainforests!

Blue carbon ecosystems not only prevent climate change, they also protect coastal communities from its harmful impacts, such as rising seas and flooding, and provide important habitats for marine life. Sadly, humans continually overlook the benefits of these incredible ecosystems and are destroying them at an alarming rate. It is estimated that every minute, up to three football fields of coastal habitats are being lost.

Read on to learn more about these different ecosystems, including why they’re important, what’s driving their loss, and how you can help protect them!

Mangroves are trees or shrubs that are found along coastlines in the tropics and subtropics. Though exact estimates vary, there are at least 50 species of mangroves worldwide. Mangroves are one of the most distinguishable types of plants thanks to their sprawling, tangled roots which are visible above the ground.

Mangroves are hearty plants that are uniquely adapted to survive in inhospitable conditions. Because mangroves grow where the land meets the sea, they are regularly flooded with salt water when the tide comes in. Their sturdy, stilt-like roots keep them stable as they are submerged under water. While the salty seawater would kill most other trees, mangroves are able to filter out most of the salt as it enters their roots. Mangroves’ above ground root systems also help them to “breathe,” which allows them to thrive in oxygen-poor soils. Mangroves cover more than 57,000 square miles (147,900 square kilometers) of the earth’s surface – or an area roughly the size of Greece. While they can’t survive freezing temperatures and are only found in warmer climates; their range is expanding as climate change causes global temperatures to rise.

Despite its name, seagrass is not actually a “grass” at all. And no, it’s also not a seaweed.

While seaweed is a type of algae, seagrass is an aquatic flowering plant. Like the flowering plants that live on land, seagrass have roots, leaves, flowers, and seeds – they’re just fully submerged underwater! A seagrass bed absorbs the sunlight that beams through the water.

Though they’re not true grasses, seagrass get their name from their green grass-like leaves. There are 72 known species of seagrass which vary in shape and size. While some seagrass leaves look like flat grass blades, others are shaped like ovals, fern fronds, or long spaghetti noodles.

Seagrass is found along coastlines all around the world, except in Antarctica. Like all plants, seagrass need sunlight to perform photosynthesis. Because of this, seagrass are only able to grow in clear, shallow waters. In some places, seagrass grows densely clumped together and carpets large areas of the seafloor. These ecosystems are known as seagrass beds or meadows.

Salt marshes, also known as tidal marshes, are coastal wetlands that are regularly flooded with salty seawater that is brought in by the tides. Salt-tolerant plants such as grasses, sedges, and reeds sprout up from the soggy ground, painting the landscape shades of grays, browns, and greens. Their deep, mucky soils are made up of mud and peat, the latter of which is a spongy material consisting of decomposing plant matter. An egret wades through a salt marsh along New York’s coastline.

Why are blue carbon ecosystems Important?

They act as carbon sinks

Though blue carbon ecosystems cover far less land area than terrestrial forests, they are carbon-sequestering powerhouses. Mangroves for instance can store up to 10 times more carbon per acre than land-based forests.

Wet coastal soils have much lower oxygen levels than those on the forest floor, which causes dead plant matter to take a longer time to decay. As a result, the carbon stored in coastal soils can remain trapped there for thousands of years.

The chart below compares the amount of carbon that is stored in the soils and biomass of different ecosystems: Provide shelter and food for animals

The dense, intertwining roots of mangroves act as sheltered breeding and nursery grounds, protecting fish and shrimp species from larger predators. The shrubby trees are also home to oysters, barnacles, sponges, and anemones which cling onto the submerged roots. Pelicans build their nests at the top of mangrove trees, while lobsters burrow down in their deep muddy soil.

Many small creatures can also be found hiding among swaying seagrass beds and thick marsh grasses. Next time you’re diving or snorkeling, keep an eye out for skinny pipefish and tiny seahorses that use their camouflage to blend in with seagrass blades.

Along with providing a safe haven, blue carbon ecosystems are an important source of food for animals both above and below the sea. Animals like dugongs, manatees, and sea turtles can be found grazing on seagrass leaves. There’s a reason that dugongs are nicknamed “sea cows” – an adult dugong can eat up to 88 pounds of seagrass in a day. That’s about the weight of 50 heads of lettuce! The average adult green sea turtle consumes about 4.5 pounds of seagrass leaves in a day.

Birds like herons, egrets, and geese are frequent visitors to salt marshes as they come to forage for insects, crabs, and fishes. Raccoons and mink can also be spotted visiting the wetlands in search of a bite to eat.

Even the dead and decomposing biomass of blue carbon ecosystems serves an important ecological role. Crabs feast on the decaying leaves that fall from mangroves. As seagrass breaks down, the organic matter provides nutrients for organisms like worms, sea cucumbers, and various filter feeders.

As climate change causes tropical storms to become more powerful and sea levels to rise, there is greater risk of coastal flooding and destruction. The vegetation that fringes shorelines acts as natural barriers, defending communities against these damaging impacts.

Mangrove roots stand strong against crashing waves and storm surges, which is when seawater is pushed ashore during a big tropical storm. A 100 meter stretch of mangroves can reduce the height of waves by up to 66%. It is estimated that mangroves protect 15 million people from flooding every year and reduce property damage by more than $65 billion. These numbers will only grow as climate impacts get worse.

Though they’re not as burly as mangroves, salt marsh grasses and plants are highly effective at reducing the power of smaller waves. Their peat soils also help prevent flooding by absorbing water like a giant sponge. Currently, more than 600 million people live near the world’s coasts. These coastal communities depend heavily on their marine environments for both income and food security. Many coastal inhabitants make their living from fishing and rely on seafood as a cheap source of protein. In the Maldives, for instance, the local population relies on seafood for more than three-quarters of their protein.

Healthy blue carbon ecosystems play a critical part in maintaining the fish stocks that sustain these populations. The commercial fisheries that feed the world also rely on the productivity of these coastal ecosystems.

Many of the fish that we eat spend their early days swimming among mangrove roots and seagrass leaves. Nearly all (95%) commercial fish species depend on coastal habitats at some point during their life. If these ecosystems are destroyed, fish won’t have a safe place to raise their young and their populations will decline.

Blue carbon ecosystems are also a great place to visit and explore. They support tourism jobs and provide recreational opportunities, such as birdwatching, kayaking, boat tours, and fishing. Because they support coral reefs and the entire marine food web, blue carbon ecosystems also ensure we have rewarding diving, snorkeling, and whale-watching experiences. What are the threats to blue carbon ecosystems?

Despite all of the benefits that blue carbon ecosystems bring to people, nature, and the economy, they are among the most threatened ecosystems. Our world’s blue carbon ecosystems are rapidly shrinking in size, as 98,000 to 2.4 million acres are destroyed each year. Up to half of the world’s mangroves and seagrass have been lost since the 1940s and 1990s, respectively. Though salt marshes have fared slightly better, they’ve still lost a quarter of their coverage since the 1800s.

The destruction of these vital coastal habitats is largely the result of development, agriculture, pollution, and overharvesting. As the world’s population grows, the pressure on these ecosystems only increases.

Mangroves, seagrass, and wetlands are removed to construct resorts and golf courses, create shrimp farming ponds, and make way for croplands, like rice and palm oil plantations. Because they are a cheap source of fuel and durable building material, mangroves are also often cut down for their timber.

In the Caribbean, it is common for hotels to clear mangroves or seagrass to create “pristine” beaches and swimming areas for tourists. Boat anchors and propellers also pose a danger to delicate seagrass beds.

Pollution from the sediments and fertilizers that seep into the ocean is another major threat to blue carbon ecosystems. In recent years, poor water quality has led to massive algae blooms that stretch from the Gulf of Mexico to Africa. When this algae accumulates along shorelines in Mexico and the Caribbean, it smothers and kills the seagrass that lies below. When mangroves, seagrass, or salt marshes are degraded or destroyed, their enormous carbon stores are released into the atmosphere. Studies show that the degradation and conversion of coastal ecosystems releases up to 1.02 billion metric tons of carbon dioxide into the atmosphere each year. That’s the same amount of carbon that is emitted by driving 2.5 trillion miles, or 101 million laps around the earth.

In addition to releasing carbon, this loss of coastal vegetation leaves coastal destinations and communities unguarded against the powerful waves that strike against their shores.

How can you protect blue carbon ecosystems?

Every blue carbon project takes a different approach, based on the local situation. For instance, the Kenya Blue Forests project that we support is protecting more than 1,400 acres of mangroves on Kenya’s southern coast. Among other activities, the project educates local villagers on the importance of mangroves, engages them in replanting efforts, and involves them in forest monitoring. The project also channels funding into local health care, skills development, and education initiatives. By conserving these valuable blue carbon ecosystems and creating livelihood opportunities, the project fosters marine health and improves the resilience of Kenya’s coastal communities.

Offsetting your carbon footprint is easy and surprisingly affordable. If you’d like to learn more, then be sure to check out this blog post about carbon offsetting and how it works.

When offsetting your carbon footprint, keep in mind that not all carbon offset projects are of the same quality. When selecting a blue carbon offset project to support, we recommend following these 10 tips to ensure that the project is credible and that your contribution will be delivering the intended impact.

Click here to offset your carbon footprint and learn more about the different projects that we support.